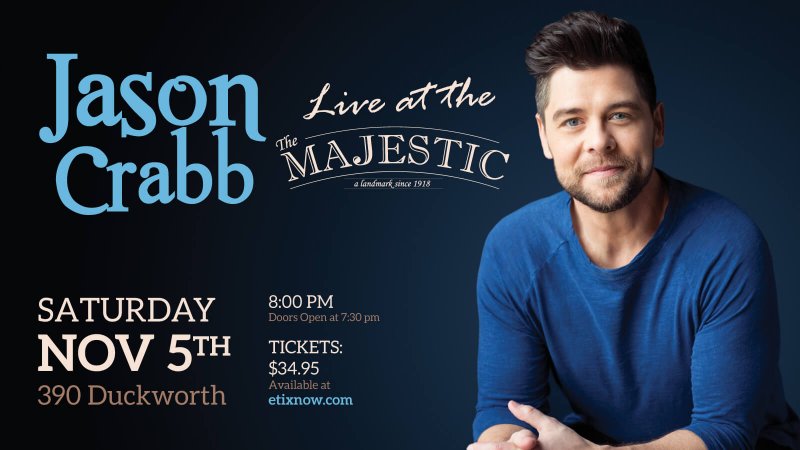 We are so excited to announce that Jacob Crabb will be the first concert at The Majestic!

His unmatchable vocals, unparalleled charisma, GRAMMY nods and seventeen Dove Awards aside, Jason Crabb is a rare breed. Neither defined by, nor confined to a genre or even a singular career path, his powerful, emotive voice and talent transcend industry labels and artistic nooks.

Add to that his authentic humility and relentless commitment to cultivating the most from what God has given him, and it’s clear that Jason Crabb—the vocalist, the author, the actor, the all-around entertainer—is an anointed phenomenon.

Born and raised in Beaver Dam, KY, a rural southern town known more for its catfish than culture, Jason’s voice and values were steeped in the tradition of faith and family. At the age of 14, Jason took to the road with his family, endearing himself to audiences around the country and the globe with his searing vocals and transparent faith.

Dove Awards were but the icing on top of the family’s illustrious career. But, as with all things, the family grew, changed and the members obediently took steps in faith to follow their own God-directed paths.

For Jason, this meant going solo. 2009 saw his self-titled solo album race to the top of the charts, while Jason’s rise and notoriety as a soloist earned him nomination after nomination.

“Rarely have I met an artist with even a portion of Jason’s talent react with such authentic surprise and gratitude at honors like these,” says CCM Magazine editor, Caroline Lusk. “He demonstrates the same grace he sings about on-stage and off.” As it turns out, the demonstration is as unintentional and natural to Jason as his multi-octave range.